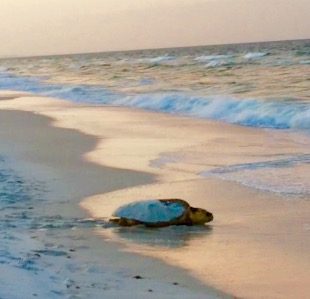 Last Thursday started out like any other Thursday since May.

May 1 was the start of sea turtle nesting season, and since I’ve been volunteering for South Walton Turtle Watch, I’ve been hitting the beach around 5:15 on Thursday mornings to look for evidence of new turtle nests.

This past Thursday was a typical gorgeous beach morning on 30A. The sun painted the sky a faint peach as fluffy gray clouds rolled in the distance. The sand was loosely packed, and the surf was bubbly and white. I’ll have to admit that prior to turtle walking, I’d only seen a couple of sunrises in my life. Man, was I missing out.

As you might have read in last week’s Friends of SW Turtles blog, I was out of town a couple of weeks ago so my husband Dan stepped in and walked solo for me. As fate would have it, he found a nest without me. So my quest to find a nest was even more intense; if he found a nest, then I simply had to.

About ten minutes into last week’s walk, Dan stopped short. I walked on a few steps with my eyes scanning the sand directly in front of me looking for turtle tracks.

After I realized he wasn’t walking beside me anymore, I turned around to see if he’d found a cool shell or some trash. But the look on his face was hard to read. His eyes were as big as saucers staring up toward the dunes, so I looked in the direction he was looking.

But all I saw was a mound of sand.

“Elaine. Do you not see that?”

I looked at the mound again.

“Well, if I use my imagination, I guess that mound of sand looks vaguely like a sand sculpture of a turtle,” I replied.

He hadn’t moved a muscle. He was still staring with those bug eyes, so I looked again.  This time I saw a big fan of sand flip over the mound of sand. I looked closer and saw a turtle flipper.

Not only had we come upon a turtle nest, but THE TURTLE WAS STILL THERE.

I’ve since heard that the odds of this happening are very rare. Mamas typically nest at night, so the turtle walkers usually only see her tracks which lead to the nest. Our little lady must have gotten a late start to be finishing up at sunrise.

Once I realized THE TURTLE WAS STILL THERE, I could hardly breathe. I knew I should be getting video and taking pictures, but all of a sudden I was all thumbs. Plus, I didn’t want to take my eyes off of her magnificent beauty.

The neighborly wave she gave turned out to be one of her last sand flips. She’d finished covering the nest and began heading back to the water. She was covered in sand from her hard work. That’s why she looked like a sand sculpture at first glance. Her shell was about three-feet long, and she weighed about 200 pounds.

I managed to fumble my phone out and get some video of her as she made it to the water’s edge. Click the following link to play the video:

She was a loggerhead and her nest was #52 in Walton County this year. Her nest was too close to the water, so Eric and Beth from Turtle Watch came and moved the eggs further back toward the dunes. Having a nest too close to the water could be risky if we have a storm. A storm surge could wash the eggs out to sea. This nest had 122 eggs that looked like slightly dented ping-pong balls.

After the nest was safely moved and marked off with stakes and tape, we took the traditional jump for joy. I have discovered two things during this turtle season: I love seeing the sunrise and I can’t jump. 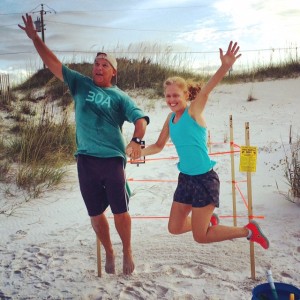 Dan and Elaine jump for joy after finding nest #52.

Watching that mama turtle make her way back to the Gulf ranks up there as one of the most magical moments of my life. And to see that with my husband made it even more special.

Now if only we can watch those babies hatch…